Costa Rica disbanded its army in 1949, just a few years after the poem "Rasur or "Week of Splendor" was written in Spanish by Roberto Brenes Mesén. This prophetic poem, translated to English, tells the story of a master teacher, Rasur, who enters a mountain village and awakens the children to the ways of peace. The children's relationship with Rasur, opens the way to peace among all of the villagers. The poem became the basis of a proven, skills-based method for peacemaking now taught in the public schools and at the UN University for Peace in Costa Rica. 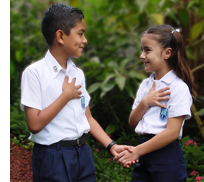